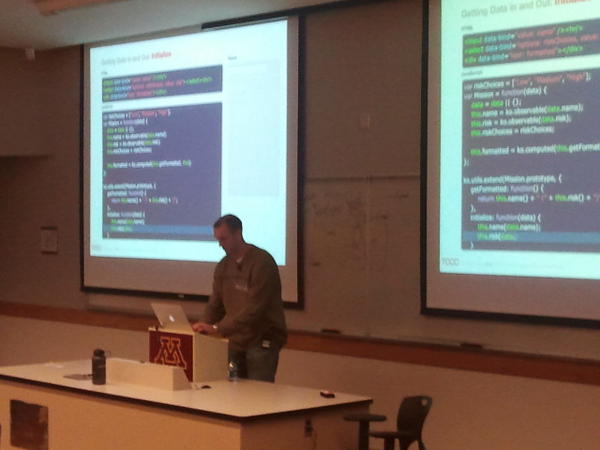 Last weekend, I was invited to talk about Knockout.js at Twin Cities Code Camp. It was a very enjoyable day, as I saw several great presentations and had a chance to talk to many Knockout users.

I was told that there had been several sessions in the past that touched on Knockout, so for this talk I decided to focus on some tips, tricks, and techniques that can be used to get the most out of Knockout. The topics covered included:

There was a small amount of overlap with the session that I did at ThatConference in August, but all of the samples were new for this talk. The project that I used to give the presentation is also described in the ThatConference post and a reference project lives here.

Here is a screencast of the presentation:

A few clarifications from the presentation:

Participating in the code camp was definitely worth the effort of traveling up to the Twin Cities. I would be happy to hear any type of feedback on the presentation. Photo by @JudahGabriel.